When I was in elementary school, I came across a series of books in the school library about the metric system. I don’t remember the title or the author, but I do remember reading each of them and falling in love with the measurement system used by almost every country in the world other than my own. The advantages of the metric system, especially ease of conversion between units, are well-known, and I won’t belabor them here. Let’s just say (and this will not come as a surprise to those who know me well) I became a passionate fan of the metric system from a young age.1

That said, I have always felt that the metric unit with the weakest case is degrees Celsius.2 Yes, it’s nice that water freezes and boils at 0 and 100, rather than 32 and 212, but frankly it’s really not that hard to remember the numbers 32 and 212. The biggest advantage of the metric system, ease of conversion, really does not apply to temperature. It’s a pain to remember that there are 5,280 feet in a mile or that there’s 128 fluid ounces in a gallon3, compared to remembering that there are 1,000 meters in a kilometer or 1,000 milliliters in a liter, but we don’t have to convert degrees Fahrenheit into any smaller or bigger units. 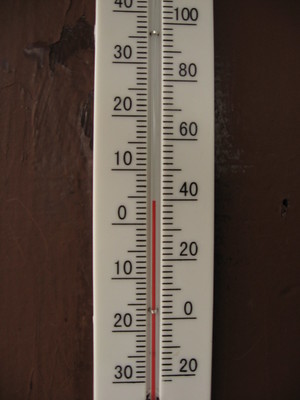 Some passionate advocates of the Fahrenheit scale will point out that the scale is more granular, allowing finer measurements for the air temperatures encountered in everyday life. For example, the National Weather Service reports that the warmest high temperature in the contiguous United States on Christmas was 84°F in Falfurrias, Texas, and the lowest low temperature was -13°F in Copper Basin, Idaho, a difference of 97 Fahrenheit degrees. In Celsius, those temperatures would be reported as 29°C and -25°C, for a range of 54 Celsius degrees. Frankly, I think not a very strong argument, in terms of everday applications such as weather or cooking: most people can hardly detect a 1 Fahrenheit degree difference in air temperature, and most ovens are not so precisely calibrated. In these cases, the increased granularity of Fahrenheit is unnecessary.

By far the strongest argument for America adopting Celsius is its universality outside the U.S. Standardization of units makes commerce and communication between nations easier.

After earning my PhD in mathematics in June 2009, my first job was a short stint as an adjunct instructor at a culinary school, where I taught my students (among other things) how to convert between different customary units as well as between customary and metric. My second job was as a temporary lecturer for an academic year at an ancient university4 in Scotland. In the U.K., my dream of a Celsius life came true, as weather reports were given in that scale. (On the other hand, speed limits, driving distances, and the volume of beer sold in pubs, are still given Imperial5 units.) Upon repatriation, I was getting most of my weather information from the Internet, and I realized I could set website an weather apps to Celsius, allowing me to continue my Celsius paradise in America.

However, my own private Celsius paradise couldn’t last. Some cracks developed:

Then there’s the fact that I now live in Minnesota, a place with serious weather and hence frequent weather-related conversations. Several times a week, I read the Updraft blog, which provides detailed discussions of weather forecasts, weather records, and comparisons of different weather computer models (and gives temperatures in Fahrenheit). I consult the weather report before getting dressed, to determine if I want to wear (depending on the season) long underwear, a sweater, short sleeves, pants, or shorts. I am often talking about the weather with other Minnesotans, and of course those conversations use Fahrenheit.

It turns out, for the same reasons that a nation should adopt the same units of measurement as the other nations in the global community, an individual should probably use the same units of measurements as the other individuals in their community. As most of my weather conversations are with other Americans, who think and use Fahrenheit, it makes sense for me to do so as well.

But I’m still not going to change the navigation app on my phone to miles.