Before I discovered mailmerge, my workflow for writing a test was basically:

At least, that was my intended workflow. But typically I would also:

Sometimes I would repeat the last two steps multiple times. This was obnoxiously inefficient.

Then I discovered the mailmerge package.

Here is a basic (silly) example illustrating how the package works:

The capital of Illinois is Springfield. The U.S. Census Bureau estimates that in mid-2017, there were 167,376 people living in Springfield1.

The capital of Pennsylvania is Harrisburg. The U.S. Census Bureau estimates that in mid-2017, there were 49,192 people living in Harrisburg4.

This is followed by the appropriate footnotes. 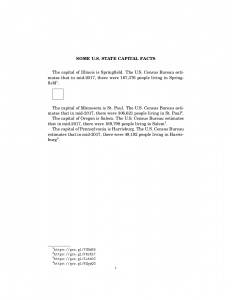 I put the silly TikZ square in this example to illustrate that the mail-merged text is placed where the \mailentry occurs in the code.

Spacing is significant in the \mailentry macro. If there is a space next to \field{[field name]} in the \mailrepeat and after the comma the corresponding field in the \mailentry, this will produce an awkward amount of space in the output. For example,

It’s very subtle, but I am a perfectionist.

If you have many fields, the comma-delimited list argument to the \mailentry can get unwieldy. One trick I use is to end each entry with a comment containing the field name:

Especially when the fields are difficult to tell apart based on content (e.g., when they are different constants for math problems), this makes it easier to know which field you are changing. Also, the comments prevent any space or line break before the comma from affecting the output.

For a test, each version would correspond to a single \mailentry. Consider this made-up quiz, which has two versions (Form A and B):

If you print $\lceil N/2\rceil$ copies of the resulting PDF (where N is the number of students in your course), two-sided, then the pile of quizzes will be alternated by version as they come out of the printer, ready to hand out to your class.